You are here: Home / News / Industry Trends / What is pulse oximeter?

What is pulse oximeter?

A pulse oximeter is a medical device that measures the amount of oxygen in the blood of a patient's arteries. 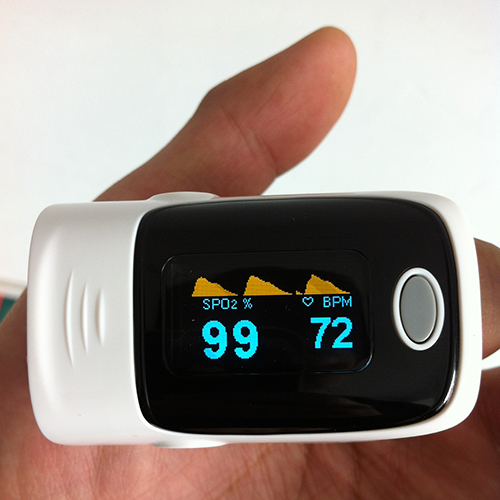 In addition to heart rate, blood pressure, respiratory rate and temperature, pulse oximetry (PO) is considered to be the fifth most important health indicator. Hemoglobin (Hb) is an important component of blood cells that transport oxygen from the lungs to other tissues of the body. The amount of oxygen that hemoglobin contains at any one time is called oxygen saturation. Oxygen saturation is expressed as a percentage, which is the ratio of the oxygen content of hemoglobin to the oxygen carrying capacity of hemoglobin. Oxygen saturation is an important physiological parameter reflecting the normal respiratory function and oxygen content of the human body. It is an important physiological parameter showing whether or not the tissues of our human body are healthy. Severe hypoxia can directly lead to tragedies such as suffocation, shock, and death. In developed countries such as Europe and the United States, people pay much attention to the monitoring of blood oxygen, and the oximeter has a high penetration rate.

Based on changes in the amount of light absorbed during arterial pulsation. Two light sources, respectively visible in the visible red spectrum (660 nm) and the infrared spectrum (940 nm), alternately illuminate the area under test (typically fingertips or earlobe). The amount of light absorbed during these pulsations is related to the oxygen content in the blood. The microprocessor calculates the ratio of the two spectra absorbed and compares the results to a table of saturation values stored in the memory to obtain hemorrhagic oxygen saturation.

A typical oximeter sensor has a pair of LEDs that face a photodiode through a translucent portion of the patient's body (usually a fingertip or earlobe). One of the LEDs is red, with a wavelength of 660 nm; the other is infrared, with a wavelength of 940 nm. The percentage of blood oxygen is calculated by measuring the light of the two wavelengths having different absorption rates through the body.

Patients must monitor blood oxygen during first aid and transshipment, fire emergency, and high altitude flight; heart disease, high blood pressure, diabetes, especially the elderly will have respiratory problems, monitoring blood oxygen indicators can understand their breathing well, Whether the immune system is normal or not, blood oxygen saturation has become an important physiological indicator for daily monitoring of ordinary households; medical staff in the ward round and outpatient visits also use blood oxygen as a monitoring item, the number of use has a tendency to over-steel the stethoscope; It is a long-term snoring patient who uses a ventilator and an oxygen generator. In daily life, he uses a oximeter to monitor the treatment effect; outdoor athletes, mountain climbers, and sports athletes use oximeters during exercise to know in time. Your own physical condition and take the necessary protective measures.

A microprocessor, memory (EPROM and RAM), two digital-to-analog converters that control the LEDs, devices that filter and amplify signals received by the photodiodes, and analog-to-digital converters that digitize the received signals to provide microprocessors . The LED and photodiode are placed in a small probe that is in contact with the patient's fingertip or earlobe. Pulse oximeters typically also include small liquid crystal displays.